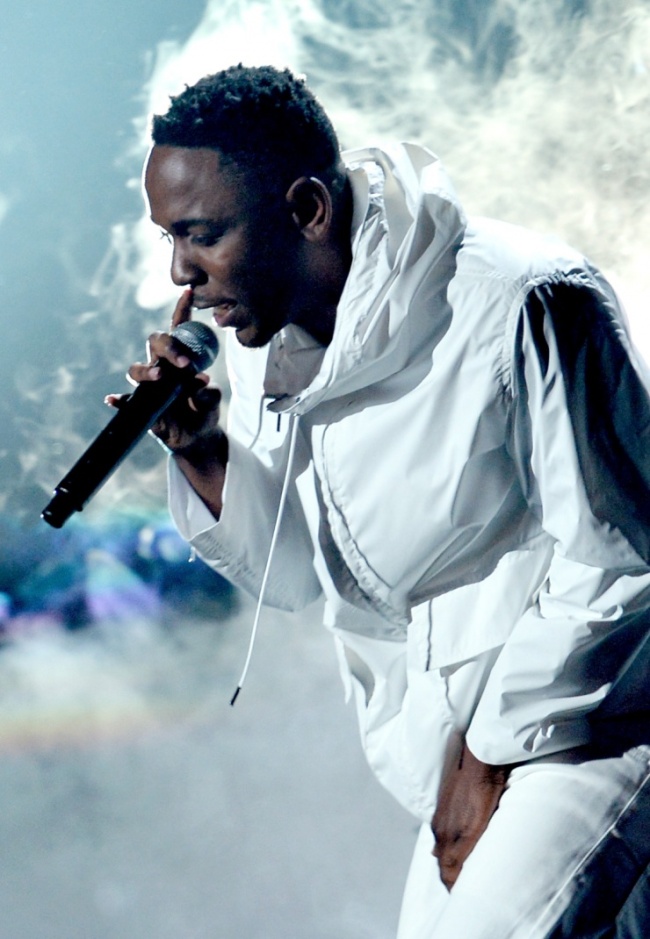 When Kendrick Lamar took the stage at the 2014 GRAMMY Awards, he stared right at thousands of well dressed white people sitting in their seats, staring awkwardly at this rapper they might’ve heard of a handful of times.  They looked nervous, not knowing what to expect from this so called good kid from a M.A.A.d. city.  He was interrupting that Radioactive song that had heard on a couple commercials and they SO couldn’t wait to add to their running playlist now that they knew the artist’s name, so he’d better make it quick.

Four minutes later, the tuxedos stood and the flashy dresses swayed. This Kendrick guy had just spit two verses about gang violence and young poverty with a hungry motivation that would make you believe he had just escaped the madness of Compton.  All of a sudden he was jumping up and down pounding a bass drum with his hands, and they had to clap along.  If you haven’t seen the performance, I suggest you check it out.

So this was the guy who just lost in all seven categories in which he was nominated? Listen to the last verse of the song, which didn’t appear in the original version of M.A.A.d. city, written specifically for the GRAMMYs performance.  The last few lines sound as if Kendrick expected the snubs.  As if he was screaming out to primetime television that he doesn’t give two fucks about a GRAMMY award:

Fuck, look in my eyes, tell me I died, tell me I tried, to compromise

Tell me you love me, tell me that I, don’t give a fuck and can barely decide

Wishin’ good luck on my enemies, all of my energy go to the almighty God

I could drown in a bottle of Hennessy, fuck your amenities, I’m gettin’ better with time

And why should he care?  Good Kid M.A.A.d. city will stand as one of the best albums of Kendrick’s career.  The work earned him well-deserved commercial success and acclaim, and the credibility to claim his spot as one of the best rap artists in the field.  Can he really beat himself up for losing an award because of the color of his skin?

That’s right.  The reason why Kendrick Lamar lost in all seven of his categories was because there were white artists—generally Macklemore and Ryan Lewis–in contention.  The general response to Macklemore’s GRAMMY sweep wrote off the awards show as a popularity contest.  Like every other awards show, they recognize artists because of their likeability.  Or because they’ve attained commercial success by making pop hits.  Or because they look good in the spotlight.  But most of all, because they’re white.  Skim the list of GRAMMY winners  this year, or last year, or the last ten years.  Count how many times a black person won an award over a white contender. For years, the GRAMMYs not-so-subtly awarded black artists by crowning them within the rap and r&b genre categories, rarely awarding them  with album or song or performance of the year.  Kanye West might have won best rap album or rap performance competing against other black rappers—he is  ranked sixth all time with 21 GRAMMY awards–but has never won album or song or performance of the year.

As much as I’d like to toss away the GRAMMY Awards  and every other show into a black hole  of irrelevance, the racial discrepancies here are far to pertinent to the current  state  of  American race  relations, and more specifically, how the music industry perpetuates and demonizes black stereotypes, mutes any form of socially conscious black counterculture, and rewards white artists who make us think  that everything is hunky dory. Excuse the pun.

Friends of mine can confirm that I was one of many music heads who had Macklemore’s “Thrift Shop” video on a tab, preloaded, ready to press play to anyone and everyone with a few minutes to share.  The four-minute secondary shopping spree was one of  my favorite music videos of the year.  Hell, the duo’s  album turned out to be a decent compilation.  So  when GRAMMY nominations were announced, I wasn’t surprised to see The Heist listed in several categories, although rumors have spread that the rap nomination committee stirred controversy over Macklemore’s eligibility as a rapper in the first place.

Macklemore is a rapper.  His music belongs in the hip-hop genre, and his album deserved nominations for Best Rap Album, Song, and Performance.  His race shouldn’t be a factor in his eligibility any more than Kendrick’s.  But history has spoken, and Macklemore four more awards to add on the wall, and Kendrick chose to celebrate his seven snubs with a TDE fan appreciation concert at the House of Blues, even bringing a fan on stage to freestyle to a Section 80 classic.

Macklemore texted Kendrick to apologize, saying “You got robbed” and “I wanted you to win.”  A nice sentiment, perhaps, but Macklemore shouldn’t have to apologize for his white privilege.  The issue is so much bigger than Kendrick being snubbed.  Rather, his main stage elimination is part of a long lineage of racial discrimination in the music industry.  For that, apologies have long been due, and will most likely never come to pass.  Kendrick’s electric performance was a slight slap in the face to an audience that was hesitant to clap along at first, but when the smoke finally cleared, all we seem to talk about is Beyonce’s over-sexualized twerking.